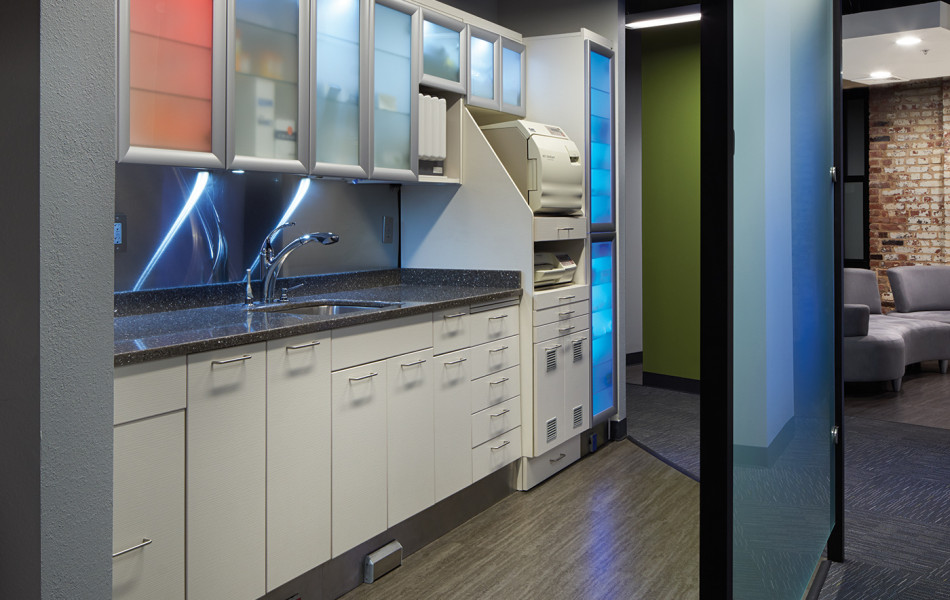 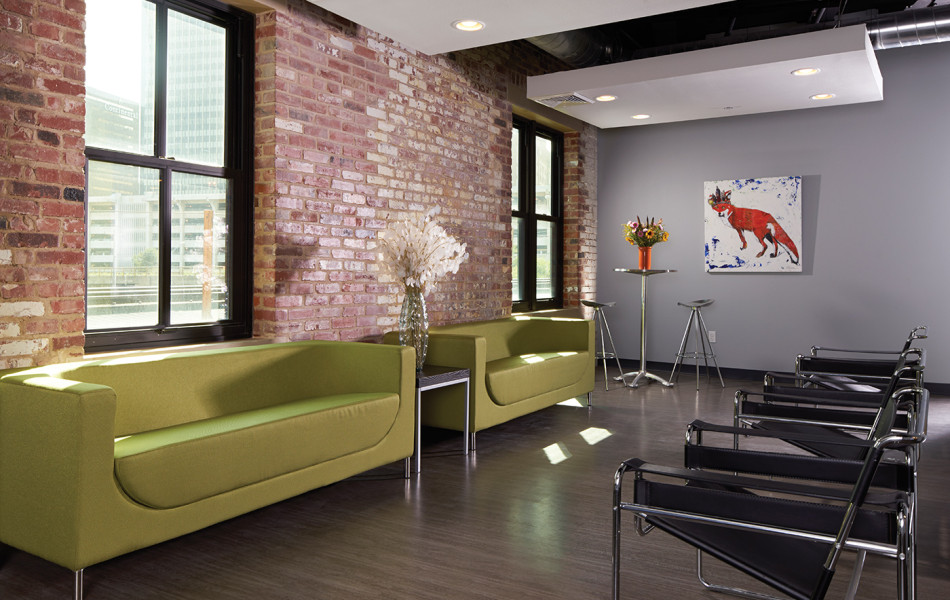 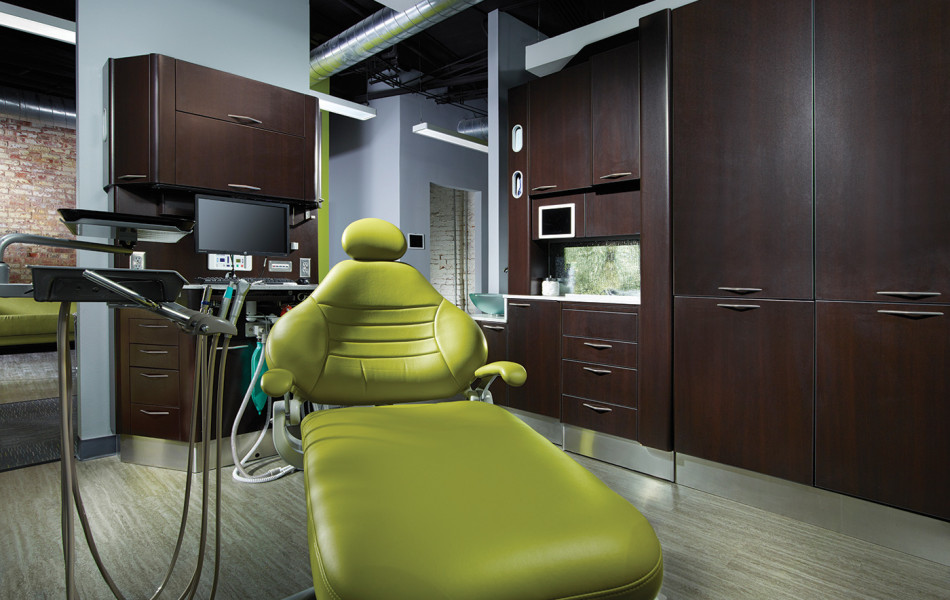 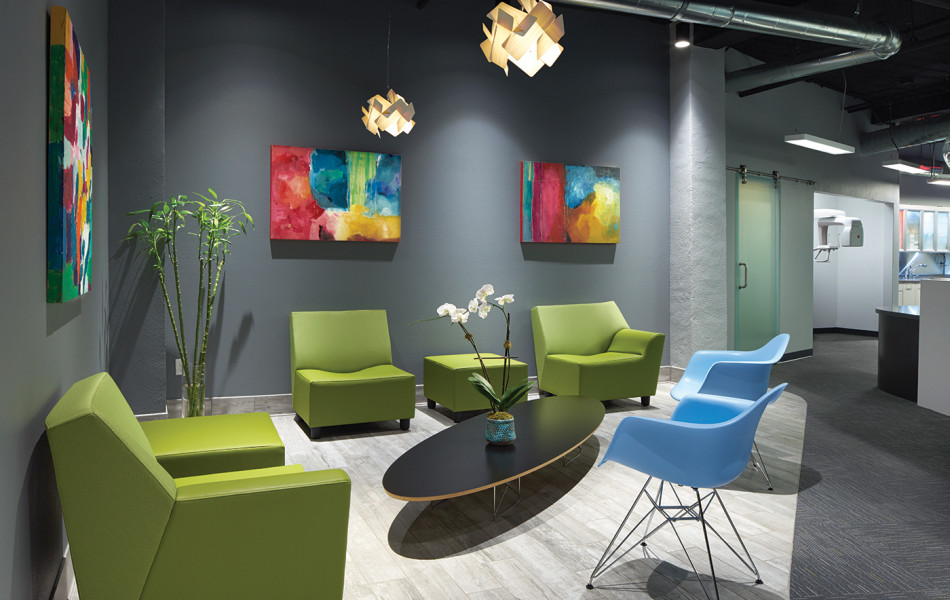 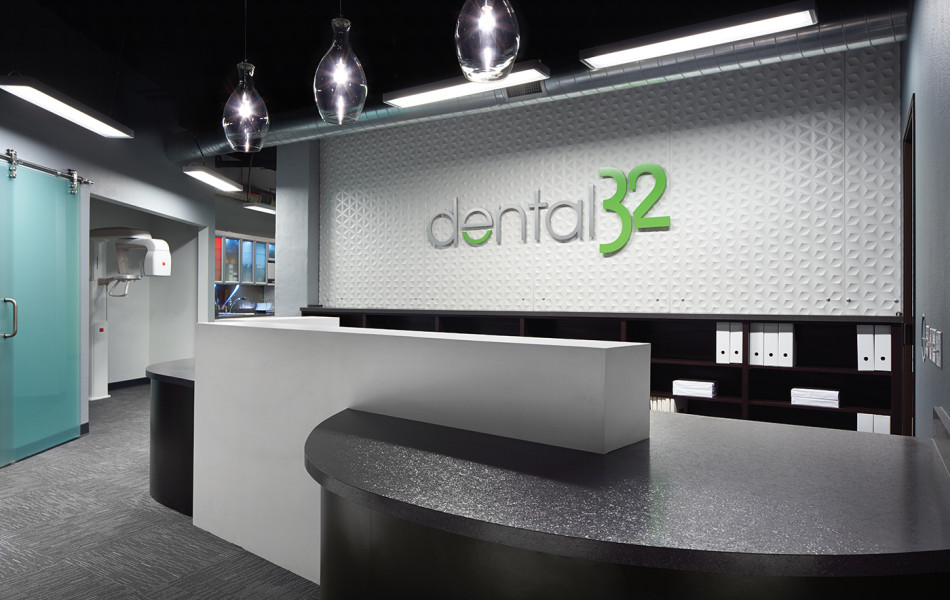 WHEN PLANNING the look, feel and layout of his Oklahoma City practice,
Dental 32, which opened its doors last March after just five months of construction, Dr. Steve Truong took a distinctly “when in Rome” attitude.

“My community was local to the arts district, design occupations and young professionals,” says Dr. Truong, whom Incisal Edge named one of America’s top dentists under age 40 in 2014. “We wanted an environment that felt like our office belonged to them: modern and clean, but not cold; bright and vibrant, but not unprofessional.”

Mission accomplished. The 2,200-square-foot, single-floor layout — in the historic Clark Building in the “Deep Deuce” arts district near downtown Oklahoma City — is unconventional, with an almost trapezoidal shape, a variety of wall textures and gallery space in which a rotation of local artists show off their work.

The project, which came in just slightly above its initial budget, didn’t proceed without challenges. Calling a structure “historic,” after all, is a more polite way of saying it’s old, and when he decided to move into the Clark Building, which dates to 1922, Dr. Truong discovered not only the expected plumbing and fire code snags but also an uneven floor that was off-kilter by as much as three feet in some areas. With the help of his interior designer and Benco Dental’s CenterPoint Design team, though, he was able to mitigate those problems and render them appealing quirks in the finished space.

“From the moment you walk through the front door, you know this isn’t your typical dental office,” Dr. Truong says. “The juxtaposition of the exposed structure, concrete and brick with the crisp new contemporary finishes creates a warm, inviting space that’s abuzz with energy.” The color palette, dominated by cool grays, lime green
and bright white, reflects that ethos as well.

Dr. Truong’s familiarity with and longtime residence in Oklahoma City was a boon as well: “Living in this upcoming area from the early stages, I was able to develop a clear vision of how I’d deliver our services to the community.” With a little help, it all turned out as planned. “My self-proclaimed ‘great’ vision,” Dr. Truong says wryly, “became an even better reality.”

“This office has a definite ‘wow’ factor. The layout itself is very interesting and unconventional.”
—REX WILDEY, DDS